During the gas turbines maintenance the mounting of rotors to the shaft is carried out by the way of pressuring the shaft cooled by the liquid nitrogen into hub of the rotor heated by the hot air jet. As the result of this technically difficult assembling operation a high tightness arises between circumference of the shaft and hub of the rotor, which surely holds the set of rotors on the shaft when the turbine rotates for thousands of RPM (rounds per minute).

If some non-uniformity of circumferential distribution of tightness turned out then the forced vibrations would appear in the operation of gas turbine facility, which would result to intensive run-out and quick failure of its particular units.

So the assembling of the turbine is always closed necessarily by real control tests, main task of ones is the measurement of general technical parameters of facility, parameters of turbine vibrations, etc. If the amplitude of axial or radial vibrations measured during testing turns out of the range established by technical documentation then the turbine would not be proven to operation.

On the figure 1 an example of the low-pressure rotor (LPR) presented, not passed the control testing due to significant radial vibrations detected on the shaft after the maintenance including the pulling old rotors off from the shaft, milling the shaft and mounting new rotors onto the shaft milled. 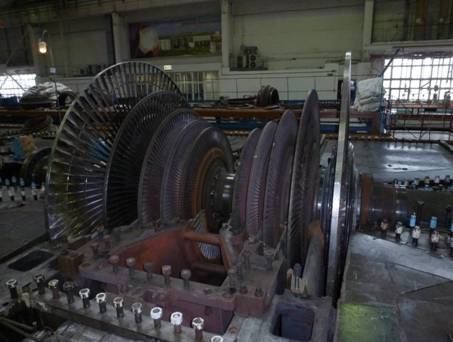 There are only two general reasons to increase the strain state of steel part: the impacts of mechanical load from the outside and the changes of mechanical properties of metal due to structure or phase transformations, elementary chemical composition deviations, etc.

It is known that the structure of metal determines significantly its physical (particularly, electrical) properties. For example the changes in elementary chemical composition or in the structure of metal results to significant change of electric conductance of one: increasing the grain (crystallite) density in the metal from 10 to 690 grains per 1 cm3 result to increasing the specific electric resistance for 10-20%, which can be detected by convenient portable eddy current conductance meter.

As result of experimental investigations carried out in cooperation of the Central Laboratory of Expertise of Russian Federation the technique to inspect strain state of steel parts and to determine a reason of high-stressed areas of metal detected is created and approved, on the basis of combined application of IN-01m the metal stress indicator and eddy current conductance meter VE-26NP (figure 3).

Fig.3. Instrumental kit for high-stressed areas of metal detection and reasons of their appearance determination

The flowchart of analytic technique to determine a reason of high-stressed areas of metal appearance is described here.

On the figures 4-5 the results of strain state inspection (by IN-01m the metal stress indicator) and specific electric conductance measurement (by VE-26NP the conductance meter) of low pressure rotors RND-1 and RND-2 hubs are presented.

Fig.4. Strain state of metal and specific electric conductance distribution on the hub of RND-1 35 rotor

Fig.5. Strain state of metal and specific electric conductance distribution on the hub of RND-2 45 rotor

You can download results of inspection described, also as the computer software to look and process them here.

A number of high-stressed metal areas are detected by IN-01m the mechanical stress indicator. Comparison of ones location with results of eddy current inspection led to discover following:

1. Increased strain state of RND-2 metal is caused by mutual inaccuracy of the shaft and 45 rotor milling, where the conductivity of metal is always remained constant (figure 5);

2. Strain state of RND-1 metal is caused by significant deviations in elementary chemical composition of 45 rotor, where local increase of the conductivity of metal was observed (figure 4).

On results of the spectral analysis of rotors metal followed in the areas with high-stressed metal and specific conductivity increased the deviations of elementary chemical composition of alloy from technical requirements TU 108.11.847-87 «Specifications for the gas turbines blanks and other parts are made from steel grade 26NiCrMoV» are detected for the following chemical elements: Cr (from 5% to 25%), Cu (up to 10%), Ni (from -62% to 10%), Si (up to 8.5 times), V (up to 11%), Mn (up to 25%) и Мо (up to 37%).